Last year I was introduced to the Homeland Heroes Foundation, a New Hampshire-based non-profit charity that assists active duty military, veterans and their families in a variety of ways. For this year’s big fund raiser, I volunteered to put together a video to explain what their organization does, who they help, and what impact they are having on veteran’s lives and families in hopes of attracting more donations in the form of either money, household items, or volunteers.

I started in January by meeting with the co-founders, Julie Waymouth and Kim McMahon, to better understand the organization and the people they assisted. I was searching for who could be the heart of the story.

I’ve been learning a lot about how to make more compelling videos by telling better stories from the folks at Still Motion. I’ve attended seminars and on-line education from these wonderful video producers for years now, and their mantra is to “speak to the heart to move the mind.”

THE POWER OF STORY IS UNDENIABLE

When done right, a story fully engages the viewer – gets them emotionally attached – which then opens their mind to listen to the message you want to deliver and have it stick.

The brilliance of what Still Motion has done is to define a process you can follow to generate great stories (see learnstory.org). However, just because they have codified it, this doesn’t mean it’s easy. In fact, it’s actually a lot of work. But the results…well, they speak for themselves. 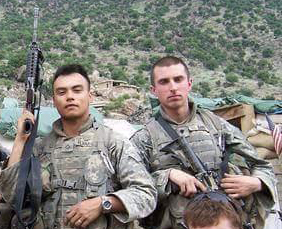 The Heart of the story, Kevin Flanagan (left), with his partner Stephan Dane (right) in Afghanistan.

It was this process that I was embarking on with Julie and Kim. They provided me with five veterans that they recently helped who I could talk to about their experience. This part of the process is essential – the pre-screen phone interviews. Many times people think they know who the lead character should be – the one who would be the best Heart – but I often find this is not the case. The process is designed to objectively evaluate a set of characters, and determine who would be the best Heart. It helps you keep an open mind so you don’t miss who might be the best character.

The process is deep and entails lots of questions and thought experiments. Once I completed the phone screens, I walked through the analysis and selected a veteran for my Heart, Kevin Flanagan.

Although all the veterans had similar issues that led to their need to be helped by Homeland Heroes, Kevin’s journey was unique in several dimensions. Most importantly, I thought Kevin was on the upside of his journey. He had gone to war, returned, fell to the bottom, but had picked himself up and was in a good place now. It was this complete journey that I concluded would connect best with the audience.

I wound up spending the whole day with Kevin. While his kids were in school, I interviewed him in his apartment. One of things I wanted to do was have Kevin speak directly into the camera. NFL films uses this technique in their fabulous series America’s Game. It is powerful. It makes the viewer feel they are being talked to directly, but it’s not obvious how to achieve it. 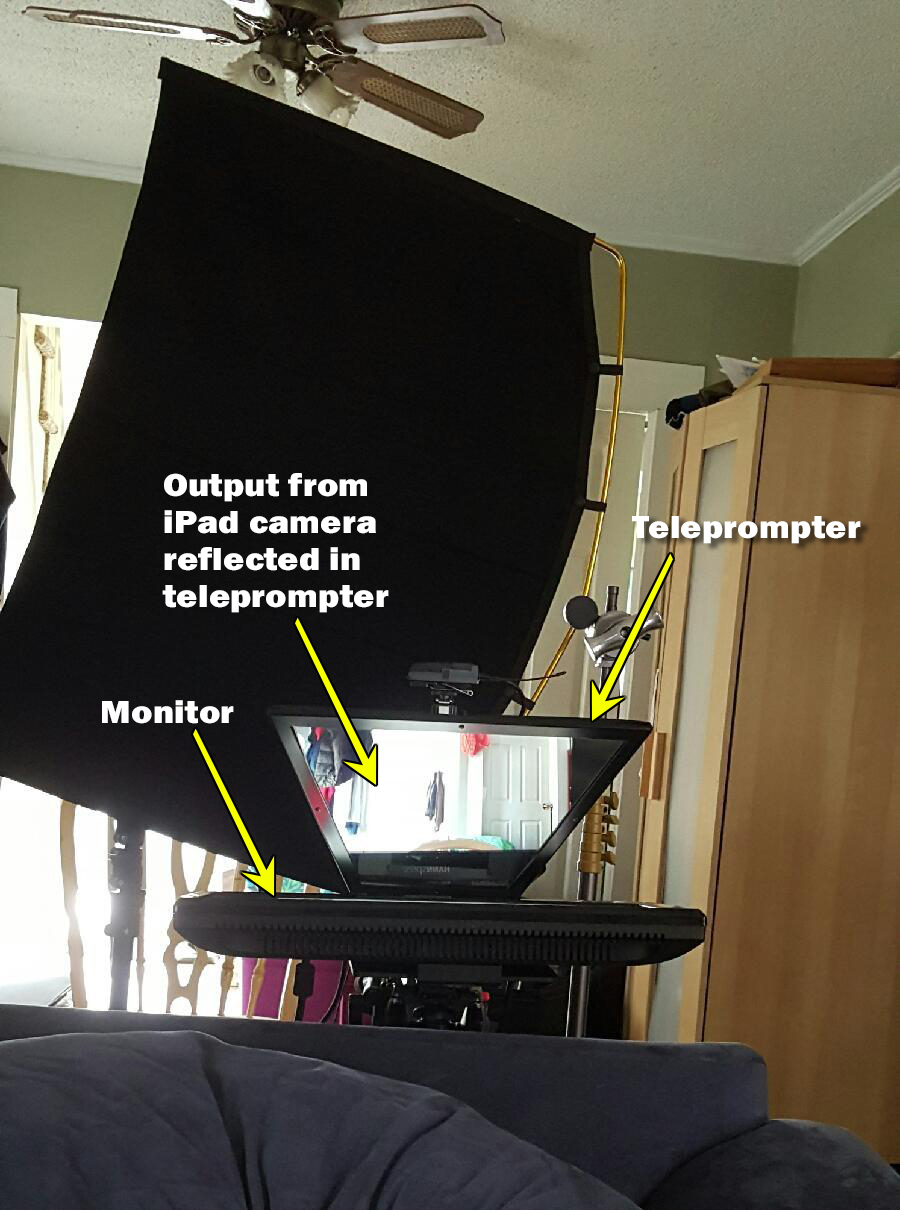 My video teleprompter set up.

In a typical interview set up, think 60 Minutes-style, the camera is essentially over the shoulder of the interviewer looking back at the interviewee. The resulting eye line of the interviewee is off camera looking at the interviewer. This happens because the camera cannot be in the same location as the interviewer. The way around this is to use a teleprompter. However, instead of loading it up with scrolling text which is typically done for a news anchor or a Presidential speech, I displayed a live shot of my face instead. I used an iPad’s camera to shoot video of me and connected the output of the iPad to a 20″ display that was placed on the teleprompter. This allowed Kevin to talk to me while looking directly into the camera. I sat right behind the camera with a big black flag positioned to hide me so he wouldn’t be tempted to take his eyes off the teleprompter, but he was able to hear me just fine.

The result was stunning.

Kevin said he felt like he was talking to me over Skype. A good analogy. He was very comfortable talking to me this way. This is very apparent because he was fully engaged, honest, and, at times, emotional during the interview. Without question this technique was a complete success and one I will be sure to use again in the future.

I took B-Roll the rest of the day. First after his kids came home then at the gym during his workout.

For Julie and Kim, I set up the typical 60 Minutes-style interview because I wanted the audience to have a break from watching the footage with Kevin.

With my homework from the pre-screen interviews and my pre-production meeting with the co-founders, I was able to capture everything I needed to tell the story. It took some time sort and edit the interviews, but I was very pleased with the final result.

The film debuted at the Homeland Heroes third annual Dinner Dance on March 12, 2016. Surprisingly, the crowd clapped at several points throughout the video, and then gave Kevin a standing ovation when it was announced that he was at the dinner. The Homeland Heroes website will have the video on their home page.

Podcasts are sponsored by